Get fresh music recommendations delivered to your inbox every Friday.
We've updated our Terms of Use. You can review the changes here.

by Bob Corn and Powerdove 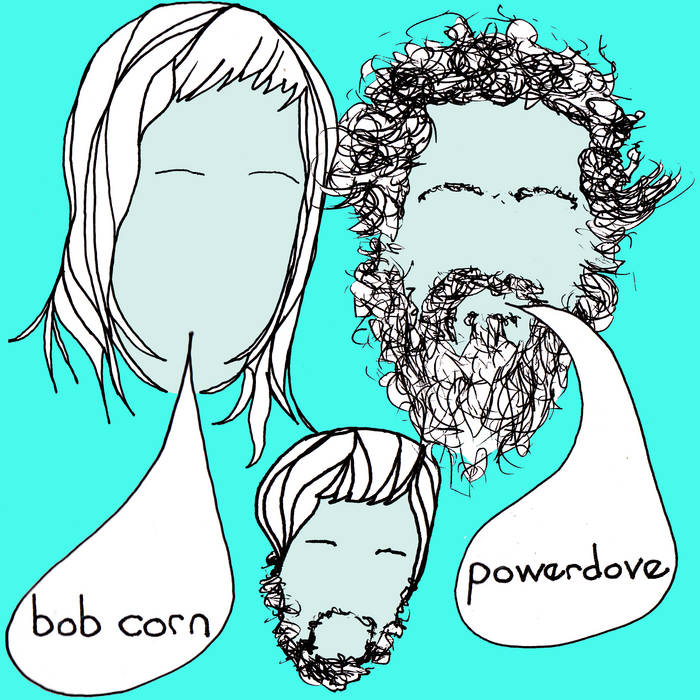 North Pole Records is proud to release another split 7” by Bob Corn, the non-stop Italian touring machine. This time he brings along his friend, Annie Lewandowski aka Powerdove. Both play a minimalist style of hypnotic acoustic pop, and like the last Bob Corn split 7” with Larry Yes, this one includes an original song by each band and a cover of each other’s songs. The 7” includes a download code for the songs too.
Bob Corn is Tizio Sgarbi and he has spent the last five years touring through Europe and the US, mainly by train and with only an acoustic guitar and some wooden soled shoes that tend to keep the beat for him. His music reflects the sparseness and beauty associated with the farming life that he grew up with. His soft guitar, tender lyrics, and hopeful songs are filled with longing, hushed harmonies, brushed drums, and broken English. The sound is captivating with Tizio sounding like a shy Leonard Cohen or a sleepy Bonnie "Prince" Billy.
Powerdove is the musical brainchild of upstate New York musician Annie Lewandowski. Originally conceived of as a solo project in 2008, powerdove has grown to include collaborations with Bay Area musicians including Alex VIttum, Jason Hoopes, and Deerhoof’s John Dieterich on “Be Mine”(Circle into Square 2011), William Ryan Fritch (Anti-Con, Asthmatic Kitty, Lost Tribe) on poweredove’s self-titled EP (s/r 2011), London-based computer musician Curtis McKinney, and New York guitarist Benjamin Piekut. Powerdove has toured extensively in the US And Europe, opening for bands including Deerhoof, Swans, Casiotone for the Painfully Alone, and Former Ghosts. Additionally, Lewandowski has collaborated with bands including Xiu Xiu, The Curtains, Emma Zunz, and Former Ghosts.